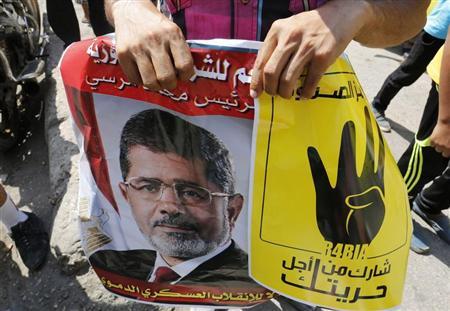 Egypt’s army-backed authorities referred deposed President Mohamed Mursi to trial on Sunday on charges of inciting murder and violence, in an escalation of the crackdown on his Muslim Brotherhood.

The new government also named a constituent assembly almost devoid of Islamists and gave it 60 days to review amendments that would erase Islamic articles brought in last year by the Brotherhood and more hardline Islamic parties.

A state prosecutor charged Mursi and 14 other Brotherhood members with “committing acts of violence, and inciting killing and thuggery”, the state news agency reported.

The charges relate to violence in which around a dozen people were killed outside the presidential palace last December, after Mursi had ignited protesters’ rage with a decree that expanded his powers.

The charges against Mursi include inciting his followers and assistants to commit crimes of premeditated murder and use violence and thuggery. Mursi is also being investigated over his escape from jail during the 2011 uprising against Mubarak. He is suspected of murder and conspiring with the Palestinian group Hamas during his escape, though no formal charges have been brought.

The government says it will restore democracy with parliamentary and presidential elections once amendments to the constitution are approved in a referendum. The presidency named a 50-member panel that will review an extensive set of amendments drawn up by a “panel of experts”.

The proposals would remove Islamic-influenced articles including one that gave Muslim scholars a say over some affairs of state, and also lift a ban on some Mubarak-era officials assuming public office.

Drawn up by a 10-member “committee of experts” appointed by decree, the draft preserves the privileged status of the military, which it effectively shields from civilian oversight.

Although Islamists won five popular votes held since 2011, the constituent assembly will have only two Islamists among its members. One belongs to the hardline Salafi Nour party, the other is a former Brotherhood leader now harshly critical of the group he left last year.