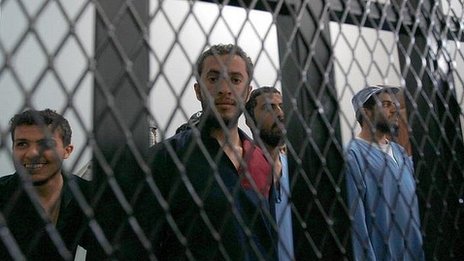 A trial has begun in Yemen of nine suspected al-Qaeda members accused of plotting to assassinate President Abdrabbuh Mansour Hadi.

Prosecutors say six of the group, including the main suspect who is still at large, planted a bomb on a road used by Mr Hadi.

Yemen is struggling to control an al-Qaeda insurgency, general lawlessness and divisions within the army.

Court documents said the group had planted an explosive device on the Siteen road in the capital, Sanaa, to detonate as President Hadi’s motorcade drove to the Presidential Palace.

It was not clear when the alleged attempt took place.

On Sunday, nine defendants appeared at a state security court but one was released for lack of evidence. Another, who remains at large, will be tried in absentia.

Presiding Judge Hilal Mahfal set the next hearing for 24 November.

Correspondents say President Hadi has been the target of several attempted attacks.

He was elected in February 2012 after his predecessor, Ali Abdullah Saleh, stepped down as part of a US-backed power transfer deal that ended months of popular protests.